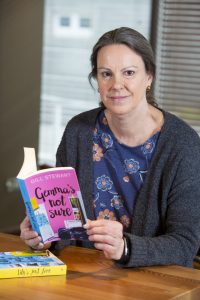 The news comes shortly after her first book, Lily’s Just Fine, was announced as a finalist for the upcoming People’s Book Prize and the author was selected to judge Premier Inn’s under 15s short-story competition to support Great Ormond Street Hospital.

With themes of testing friendships and facing adulthood, Gemma’s Not Sure will be published in May 2020 and follows the story of Lily’s best friend as she decides whether she really wants to move from her small town in Dumfries to the city of Glasgow to study music.

The key message of the story is that it’s perfectly normal for young people to be unsure of their futures, with the running theme of teen empowerment spanning the entire series.

Gill Stewart launched the series in July 2019 at Young Adult Lit Con (YALC) after starring on a panel alongside some big YA authors, namely Lucy Powrie, Kate Mallinder and Alexandra Sheppard.

Keen to represent small-town Scotland, Stewart said: “There are so many books set in London and I was quite keen for it to be [about] ordinary kids in an ordinary school who are doing special things. It’s a contemporary novel set in a contemporary town and I hope that is empowering in itself.”

She feels strongly about the negative portrayal of young people in the media and aims to use her writing to represent teens as ambitious, determined and community-minded.

Lily’s Just Fine and Gemma’s Not Sure are available now.