The famous texts have been suitably adapted by Gemma Barder and illustrated by Helen Panayi, who – like Sweet Cherry – are Leicestershire-based. The books – which include QR codes to the free audiobooks – aim to introduce younger readers to the Russian classics, while also helping literature students to understand the stories before approaching the original texts. 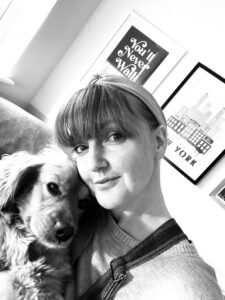 War and Peace is one of literature’s longest novels and one that many readers aim to conquer during their lifetime. What was your experience of reading the original version like?
Gemma Barder: Luckily, I was already familiar with the story, so I wasn’t starting from scratch with the characters and plot. It is such an epic, complex novel. My job was to look at it as a whole and pick out what would be the most relatable storylines for younger readers. I also re-watched the BBC’s adaptation of War and Peace with Lily James. This gave me a great example of how this incredible novel could be condensed. Clearly, there are some themes and storylines in the novel that just aren’t appropriate for younger readers, so I read some literary analysis to see if I could get a better understanding of the themes and translate them into the book without being too explicit.

What were the most important things to consider when adapting War and Peace for younger readers?
I wanted to find a storyline that the readers could understand and would be interested in, so I focused on the lives of the families, rather than the complexities of war. The war is ever-present, but I didn’t want to go into detail about battle strategies! I hope that young readers will read the book, enjoy it, and hopefully want to explore the full novel when they are older.

What were your favourite and hardest chapter/title(s) to write?
My favourite part of the story is when Pierre and Marya get their happy endings, respectively. I really like Marya as a character throughout the book, especially her complex relationship with her father – which of course had to be simplified for our version! The hardest aspect was trying to convey the more harrowing parts of the book for younger readers, for example when Andrey’s first wife dies in childbirth.

What can readers expect from The Easy Classics Epic Collection?
Some epic and unusual tales from a time in history they might not know much about. Some of the stories were new to me, but have become firm favourites. I remember having a little hardback set of Dickens’ novels that were illustrated for children. From them, I knew the storylines and characters and it made me want to read the full versions when I got older. I would love it if these versions did the same for Tolstoy et al!

Who is your favourite character from the series of books and why?
I became quite attached to Oblomov, but ultimately his story made me feel quite sad. I wanted to climb into the novel and help him. Unlike a lot of the other heroes in the series, he isn’t unkind or manipulative, just misguided. I would have quite liked to have been invited to dinner at the Prosorov’s in Three Sisters. I think that would have been interesting!

If you could go back in time to meet Leo Tolstoy, what would you ask him and why?
I would ask him what parts of the book were based on his own life or stories that he had heard. There are some quite scandalous parts of the novel and it would be great to find out if any of the affairs and family scandals were based on true events!

What do you think Russian classic literature provides modern readers with today?
A glimpse into a world that no longer exists. Glittering balls, duels at dawn. They are truly immersive and epic.

You’ve also adapted classic novels from Jane Austen. Was your writing process any different for the Russian Classics?
I am a big Jane Austen fan and had already read the six novels I adapted (some more than once!) so I was very familiar with the characters and plots already. Although I had read a few of the books from the Russian classics list, some were brand new. So, I had to do a lot more reading and background reading to make
sure I did the storyline justice!

In your opinion, why should parents and teachers encourage children to approach the classics?

I think classic literature is part of our history and certainly impacts modern-day fiction. The techniques of Austen, Dickens, the Bronte sisters and Tolstoy can all be found in thousands of novels that have been written over the past 200 years. I think anyone who hasn’t read classics would be surprised at the content of some of the novels. It isn’t all bonnets and sipping tea – although that does happen, too!

What are your favourite classics to read and how do they inspire your writing?
Jane Austen would certainly be at the top of my list. But I also love E. M. Forster and Evelyn Waugh. My sister collects Persephone books and I always love to nosy at the writers on her shelf. I love the way they capture detail. It isn’t always about the big, showy arguments. A look or a turn of phrase can be as devastating as a duel!

War and Peace is out in June 2021. Browse more books in The Easy Classics Epic Collection here.