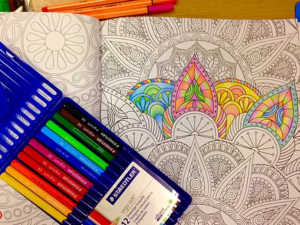 The book, titled Rangoli: stress relieving art therapy adult colouring book, features a range of bespoke Rangoli patterns and designs, inspired by the popular Hindu folk art that originates from India. The book is a fresh take on the newly popular trend of adult colouring, which encourages adults to colour in an attempt to relieve stress and channel creativity.

Sweet Cherry designer Andrew Davis believes that the book is a serious contender in the adult colouring market and is not just a book, but a good way of bringing together Leicester communities.

“The book is not just about patterns, it is about a cultural and historical tradition that celebrates colour. We wanted to use patterns that make the most of that. The book itself has a visual appeal, but it also teaches the wider community about Rangoli and helps them to engage with other cultures in a way that’s meaningful to them.”

The books were featured in a number of separate Rangoli-themed events over the course of the two-week celebrations, where visitors could take part in Rangoli arts and craft activities and then purchase the book afterwards. Sweet Cherry Publishing said that their aim was to give festival attendees a chance to continue their experiences of Diwali at home in the most accessible way possible.

The Leicester Mela was one of the organisations to feature the books. They held a shopping and cuisine Baazar in the city centre over the weekend, and their award-winning Rangoli Art Exhibition, which has been a huge success over the years, was held yesterday at the Belgrave Neighbourhood Centre.

Leicester Mela Festival Director Pravin Mistry said: “These Rangoli colouring books are a great addition to our Rangoli Exhibition work and they help to celebrate Diwali and Hindu culture in Leicester.”

New Walk Museum, who hosted a community Rangoli peacock display in which visitors could add their own designs to the artwork, also featured the book in their bookshop.