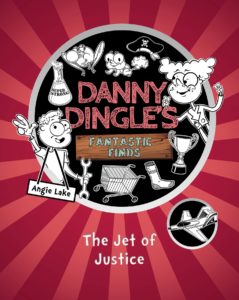 The third book in the successful Danny Dingle’s Fantastic Finds series, The Jet of Justice, is due for release this week. Aimed at fans of Diary of a Wimpy Kid and full of laugh-out-loud moments, the series is known for encouraging even the most reluctant of readers.

Central character Danny Dingle is a schoolboy inventor with a passion for science. Through expressive typeset and comic-style illustrations, Danny and his friend Percy inspire both young readers and novice scientists.

In the third instalment of the series, it’s the summer holidays – AT LAST. Now Danny Dingle can be a full-time super-inventor without boring, pointless school getting in the way. HURRAH!!! With a sci-fi convention and a flying machine competition on the horizon, Danny and Percy are desperate to finally get noticed by Metal Face. But Mum is plotting against them at every turn. Suddenly only one question is important: is summer camp as HORRIBLE as it sounds?

Since 2015, Sweet Cherry Publishing has been focussing on an initiative to bring books to schools in economically deprived areas. Based in Leicester, a multicultural city, Sweet Cherry has an advantage of easily accessing diverse communities. The Danny Dingle reluctant reader campaign in 2016 provided hundreds of ethnic minority children with free copies of the first title in the series and inspired many new readers. But it’s not just locally that Danny’s a hit. The series was launched at Hong Kong Book Fair in 2016 and received an astonishing number of pre-order sales.

The series was also included in the children’s reading corner at London Comic Con and on Danny Dingle Day Campaign in 2016. A fast favourite with children aged 7+, Danny’s adventures balance the humour of a child’s mind with a positive approach to education.

Author, Angie Lake, took part in a UK school tour this year and reached over 600 children to provide readings and fun activities, focussing in particular on schools in deprived areas. Activity packs taught students lessons on physics that fitted with their key stage two school curriculum.

Angie commented: “I’m very excited about the release of The Jet of Justice, having a third book in a series published feels like a milestone, like the characters and stories somehow become consolidated.

“I hope Danny’s fans enjoy reading this book as much as I enjoyed writing it.”

For more fun, games and teacher resources, fans of the Danny Dingle series can head to www.sweetcherrypublishing.com/resources.